Tea, or I’m Drinking Too Much

I don’t remember when, but sometime last fall I mentioned on Facebook (and maybe Twitter) that I was becoming obsessive about wanting to try more tea. As a teenager, I began drinking tea. My gateway was the same as many others, simple ol’ Lipton tea. At some point I graduated to Bigelow or Twinings, usually English Breakfast, but sometimes Earl Grey. I drank these well into my twenties, adding Chai into the fold. And then in 2003/2004, my life sort of went haywire and I became a separated father of a precocious youngster, a full-time college student, and a full-time employee at a bookstore. A bookstore with a café. Suddenly, I was drinking coffee. The teas in my cabinet grew old and dusty as my new love became Queen.

I still love coffee, but about two years ago I started to think more and more about tea. Passing Teavana stores at malls didn’t help. Posts about tea by Neil Gaiman and Joe Hill didn’t help.

As a matter of fact, Joe Hill’s post got me to go try a new English Breakfast tea, Tazo’s Awake tea. Which I loved. And still do, it’s my favorite tea. So I began drinking that in the afternoons instead of my second (or third) cup of coffee. But I wanted more and didn’t know where to start.

That’s when Pamela came to my rescue. After seeing that post, she got me some tea for Christmas. 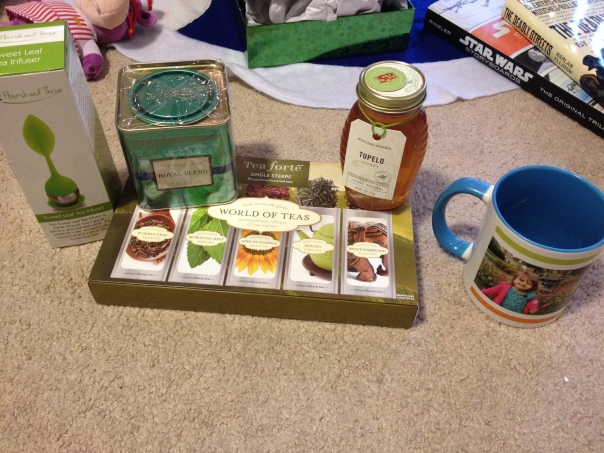 All right, so what you see there is Fortnum & Mason’s Royal Blend Tea, the official tea of the Royal Family since forever, available in the States exclusively through Williams-Sonoma. Also in the picture is Tea Forté’s World of Teas single steep set which had some amazing teas in it. I loved Moroccan Mint and Bombay Chai, and liked most of the others very much, too. Well, this has done it.

Tazo also makes a great Chai tea, too, but my problem has been finding a caffeine-free tea that I enjoy. On a recent trip to Western Massachusetts, I happened upon the Republic of Tea’s Cardomon Cinnamon herbal full-leaf tea and decided to try it. Let me tell you, it’s fucking great. It’s like Chai without caffeine. I mean, how good is that? I just finished drinking a cup in that cute mug my wife gave me for Christmas. I think my friend Jorj would like it since he’s a fan of Chai.

So those are some standout teas I’ve tried in my recent plunge into this whole new world. Feel free to recommend some teas you like. So far, I haven’t like Darjeeling much, but it may just have been the one I had from the World of Teas set.