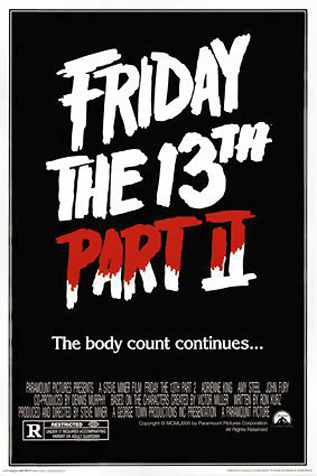 One of the things that’s great about sequels is that the premise has been set up so the action can begin at once. It’s one of the reasons why The Empire Strikes Back and The Dark Knight work so well. The characters are re-introduced in clever ways and we get right into the story. Friday the 13th Part II doesn’t even get that right. Released a year after its predecessor and featuring a new writer and director, the audience is given a recap of the previous movie in the first five minutes. It only gets moderately better from there.

I first saw the movie in my early-teens, I was probably around fourteen or fifteen when it showed up on Cinemax, and I was surprised by how different Jason Voorhees was to the monster I’d watched in later installments in the franchise, for this is the installment where Jason (Warrington Gillette) becomes the monster, which in itself is historic to horror geeks like me. Hell, Drew Barrymore died because she didn’t know this! Because you know the story, I’ll get right into my ten cents of opinions.

Amy Steel as Ginny. She’s likeable, pretty, and somewhat realistic. She’s got a strength about her that radiates from the screen. A few of the other campers are also not too badly drawn, and I’d mention their names except that I never learned them. And we’ll get to that later. But Steel is pretty good even though I wish she were onscreen even more. 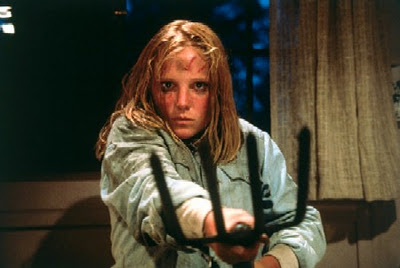 The nudity. Let’s face it, there are two reasons to watch a Friday the 13th movie: sex and violence. The first movie was much tamer on both counts than what I remembered. This one ups the nudity. I know, it’s very base of me to say such a thing but let’s not beat around the bush (no pun intended), these movies are base and when I watch them, I want to see me some boobies. This movie delivers…at least a little bit.

Jason’s introduction is also not bad. As a matter of fact, he’s almost scary. Jason’s outfit in this movie is biballs, a flannel shirt, and a sack on his head. He’s not a supernatural entity here so much as a madman running through the woods. Running. Jason Voorhees runs in this movie. He chases people, and tackles them, and is generally quite energetic.

The music by Harry Manfredini is also really good. Better, I think, than the first movie’s music. He takes the whole Psycho-­meets-Jaws thing to a new level.

Alice’s return. Adrienne King returns as Alice in the first ten minutes or so of the movie. She’s having nightmares about the events of the first flick (that helps the audience know what’s gone down until this point) and wakes up. Ms. King is likeable but she’s not a great actress. Her return is generally better than most of the lines she delivered in the first movie. And then she’s killed with an icepick. In her home. In the city. With an icepick. How come so many people die from icepicks in movies? I’ve never even seen an icepick in real life. But anyway, she’s killed and that’s the end of Alice. So, aside from her memories from the first movie that helps set the audience up for this one, what’s the point? According to the well of information known as Wikipedia, Adrienne King was stalked by an obsessed fan of the first movie and only agreed to make this movie if her time was short. Why appear at all? Besides money? Why have her at all? Anyway, it doesn’t work and it makes the ending of the first movie tragic.

Characterization. Get used to this being in my reviews of these movies, methinks. Who are these people? Why should we care about them? I’ll give that the filmmakers of both movies used likeable actors who did their best to give the characters some kind of personalities, but I never really cared about any of them. Not enough to remember their names anyway. There was the guy running the camp, his girlfriend (Ginny–who I looked up to get Amy Steel’s name), the weird guy with red hair and electronic games, the wheelchair guy, the girl-who-likes-wheelchair guy, the frizzy-haired-big-boobed girl, her boyfriend–the blond guy with the hat and the truck, the work-out girl with the dog (who gets nekkid), the smarmy lothario who’s trying to get her…and I think that’s it. These characters mean so much to the filmmakers that the weird guy with red hair actually disappears from the movie. Which leads to–

The story. This movie does not take place at Camp Crystal Lake but at another camp on the same lake, five years later. Two camps sharing a lake? Does that happen? Well, in this part of Jersey it does. I don’t remember the name of the camp and it doesn’t matter, any more than the names of the characters matter. The only purpose of the camp is to make it like the first movie but more believable (???). After all, what’re the chances that a serial killer would go to the same camp?

Not only does the story not make sense, but the direction and editing also has major flaws. After a night at a bar, Ginny and her boyfriend come back to the camp to find everyone dead. Jason attacks the boyfriend but chases Ginny. There’s some cool, intense moments hear, but then she gets away and runs through the woods. We dissolve to the full moon, dissolve back on Ginny running, then dissolve to the full moon. She seems to have run to Camp Crystal Lake, yet when Jason is in the place where she’s hiding, she comes up with the chainsaw she was using earlier in the movie to cut wood, which means she didn’t run out there. Which means…what? She was running in a circle? The boyfriend comes back in Jason’s little hut to help her “defeat” him. They go back to the camp to find the little doggie that we believed was dead because we saw the remains of the same kind of dog earlier (Shi-Tzus run rampant in the woods of Jersey). Then Jason, sans sack, crashes through the window and attacks Ginny. The camera holds the shot and fades out. Only to snap back to Ginny being loaded into the back of an ambulance, asking after her boyfriend. What happened? Why isn’t she dead? And in all of this, what happened to the weird guy with the red hair they left at the bar? Or the other campers at the bar, too? And why does the movie take place five years later? How come so many sequels take place five years later? Don’t filmmakers know that styles and technology change in five years?

All these questions are giving me a headache!

There’s a lot that’s taken for granted in this movie, stuff the characters seem to know yet shouldn’t. At least, the audience wasn’t made aware of them in the first movie. The Legend of Jason, let’s call it. The legend went that Jason Voorhees didn’t really die in the Crystal Lake but lived in the woods surrounding it. When Mrs. Voorhees is killed, he witnesses it and decides to kill everyone because of it. We’re told this legend around the campfire, which is cool, except…how come no one in the first movie knew of the legend? How come the crazy old man on the bicycle didn’t mention it when he was telling those original campers about how Camp Crystal Lake would lead to their doom? And how come Pamela Voorhees didn’t know about the legend that featured her son? And if Jason loved his mother so much, how come he lived in the woods, hiding, and not with Mother?

Overall, the movie is a fun popcorn slasher flick, but it’s little more than that. There are too many questions and holes in logic. More so than its predecessor, it feels like a very cynical movie. The cynicism of the filmmakers to give its audience what is essentially the same movie with different faces, the lack of attention to detail, or the lack of any real thought makes Friday the 13th Part II a basically forgettable movie. But it did well in 1981 and meant that a sequel would follow.