Alice on the Shelf 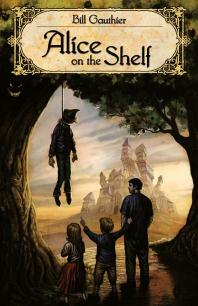 When Brad awakens with this question on his lips but his friend Miranda on his mind, a sense of unease fills him. When he finds she isn’t home, and a strange visitor is outside her house looking for a missing pocketwatch, Brad knows something is amiss.

Down the rabbit hole.

The world is familiar but different. Storybooks, fairy tales, nursery rhymes, and fantasies should have prepared Brad for the trip he is about to embark on to find the woman he loves, but the darkness that has filled this fantastic world has twisted it almost beyond recognition. Though he is searching for his friend, Brad may discover something much darker when he finds–

Alice on the Shelf.

“Alice on the Shelf is a wonderfully entertaining and interesting take on Lewis Carroll’s classic. I read it in one sitting, always wanting to know what was coming next. Bill Gauthier is a great new writer, and I can’t wait to see what he comes up with next.”

— John R. Little, author of the Stoker-winning novella Miranda, The Gray Zone, and The Memory Tree

A Note from Bill

Alice on the Shelf is a novella that means a lot to me for several reasons. Perhaps someday I’ll go into the genesis of the story and the novella, but here I just want to mention that the novella has an unofficial soundtrack.

When I began to work on a second draft of this story in 2004, almost a year after I wrote the first draft, I decided I would use music to help me get into the mood I wanted for the story. The soundtrack remains on my iTunes and is as follows:

In the years since 2004, in the various rewrites I would do, I would often go back to this soundtrack but also listen to other music as well. Some of the songs listed above makes me wince but it did the job. Obviously.

Missy woke up excited.  The Peter Rabbit clock on the wall said it was past the time she normally woke up for school.  The wind outside howled and moaned and, thinking about the night before when the snowstorm began, Missy jumped out of bed.  Giant snowflakes streamed past her window.

Missy threw on longjohns, jeans, a turtleneck shirt, and a sweater.  She brushed her teeth and brushed out her long, raven black hair.  On the kitchen table was a note her mother had left before going to work.

No school today!  You can go outside

but STAY NEAR THE BUILDING.  And try

to be with a friend.  Things are SCARY.

Missy wolfed down a bowl of Count Chocula cereal and threw on her snowboots and coat.

Things are SCARY. Mommy had been talking about the baby who’d gone missing from the lady on the first floor yesterday.  The police had been at their apartment building and everything last night, asking everyone if they’d seen anything.  Of course, no one had.

“If we didn’t need the money,” Mommy had said between cigarette puffs, looking at the snow beginning to fall.  “I’d stay home with you tomorrow.”

Missy called Kathy Chambers, her best friend, and told Kathy she’d meet her at the outside back door.  A few minutes later, they met.

“Did the police talk to you?” Kathy asked.

“Yeah,” Missy said.  “They asked if I’d seen anyone suspicious around the building.”

“Daddy wouldn’t let them talk to me.  He said they might frighten me.  He lied and said I wasn’t outside all day because I was punished.”

“The cops believed him?”

Missy nodded as if that explained everything.  They worked together to push open the back door against a snowdrift.  Wind slashed at their faces as they walked through the snow, into the small yard.  The snow was six inches high and counting.

“I dunno,” Missy said.  “Wanna play house?  We can pretend we’re Eskimos or something.”

They trundled through the snow and howling, biting wind.  A wooden fence across from the building blocked off a vacant lot.  Missy tried to push a loose plank out of the way.

Kathy helped Missy push the plank open and they squeezed into the vacant lot.

“I know.  It still sounds funny.  Like people crying.”

“Is it still there?” Kathy asked.

“Yep,” Missy said and pulled out a black garbage bag.

“I wanna be the mommy,” Kathy said.  “You were the mommy yesterday.”

“Okay,” Missy said and pulled out the little baby they’d stolen from the lady on the first floor.

The baby had turned blue overnight, his eyes had frosted white, and icicles hung from his chin and nose.

“Keep your gloves on,” Missy said.  “I saw someone on TV go to jail because they left fingerprints.”

And the girls began playing house.