← “Tee-Vee, Daddy,” or Kid’s Shows That Won’t Make You Want to Join a Cult
Hey, Kids. Do You Like the Rock N Roll? Or How David Letterman Made Life Bearable & Helped Me Through Adolescence →

The End Has Finally Come, or Hey, Mom! I Finished the Novel! 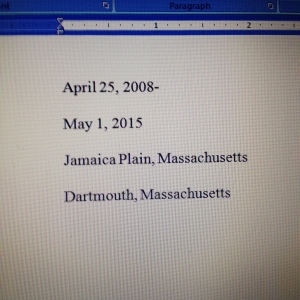 See that? That’s what’s at the very end of my manuscript for Echoes on the Pond. The reason I’m showing you is because—and I say this knowing it’s not 100% true, but roughly 98% true—I’m done with it. I have a few people giving this third draft a read, and if they all hit on things that have popped up in my head recently, or hit on things the other readers hit on, then I’ll do another sweep of the novel, but it’ll be a short one. The kind that takes a week or two instead of months. Of course, if an agent or editor at some point asks for changes that’ll make the novel better, I’ll be more than happy to oblige.

As you can see, I’ve been on this bastard for a long time now. When I began the novel in April 2008, I thought that I’d finish the first draft in three/four months, the second draft within six months, and then have the third draft to shop around in 2009. All long-form writing I’d done prior to this book indicated that should have been the case. Of course, things were different.

It’d been four years since I’d started—and finished—anything of significant length. Between 1998 and 2004, I wrote many novels. Most were pretty bad, few were terrible, and a couple were…good. For the time. They were written by a younger guy, of course. I turned 21 in 1998, so being in my early-twenties, I didn’t have much perspective on life, but I had an itch to tell stories and the insanity to think I could do it.

By 2008, I was in my early-thirties, had been through a divorce, severe depression, some of the hardest times in my life, and hadn’t written anything worthwhile except for several abandoned novels, garbage short stories, and little else of value. Well…that’s not entirely true. I wrote my late, great column American Gauthic for Dark Discoveries, a gig I really enjoyed doing and would love to do again, given the opportunity. I’m proud of those essays, though I admit that some of them are a little…well…wince-inducing. I also wrote papers for college, lesson plans, and blog posts.

But here I sit, twelve days after finishing what I consider to be my final edit, and I’m looking forward to what’s next. I have about six book ideas. Two horror(ish) novels, two “mainstream” novels (that I think may be darkly comic), and two YA novels. Way back in my mind are the science fiction novel takes on two Shakespeare plays that I’ve wanted to do for a long time now.

I think I’m going to do one of the YA novels. I want to do it something that’s fun, plot-driven, and fast. In other words, the kind of book I would’ve wanted to read when I was a kid.

Other than writing, I’ve got the real work ahead of me on Echoes…: Figuring out what the fuck to do with it now.

Posted on May 12, 2015, in Life, Memoir, Writing and tagged publishing, writing. Bookmark the permalink. 1 Comment.

← “Tee-Vee, Daddy,” or Kid’s Shows That Won’t Make You Want to Join a Cult
Hey, Kids. Do You Like the Rock N Roll? Or How David Letterman Made Life Bearable & Helped Me Through Adolescence →