With the lackluster performance of Friday the 13th Part VIII: Jason Takes Manhattan in 1989, and with the urging of series co-creator Sean S. Cunningham, Paramount Pictures sold the franchise to New Line Cinema, whom they’d attempted to “rent” the Freddy Krueger character and situations from a few years prior. This would prove a major coup for New Line because now they could finally set up the Battle of the Ages: Freddy Krueger versus Jason Voorhees. The sale in the early 1990s came at just the right time because 1989 wasn’t a good year for Freddy, either. A Nightmare on Elm Street 5: The Dream Child, released a year after the highest-grossing Nightmare, earned the lowest amount for the franchise at that time. Hoping to cash in one last time, New Line released the final Nightmare movie, Freddy’s Dead: The Final Nightmare, in 1991, and it made a good amount of money. The purchase of the Jason Voorhees character and Friday the 13th meant they now had the two most popular monsters of the 1980s and could finally put them together.

Robert Shaye knew Sean S. Cunningham would be on board since he’d been trying to get the Jason/Freddy project off the ground for years, but decided to ask Wes Craven if he had any ideas. As it turned out, Craven did have ideas…only not for a monster mash-up. Excited by any Craven involvement in a new Nightmare film, New Line Cinema went ahead with his idea for a seventh movie. This gave Cunningham and the studio the chance to do what the eighth Friday the 13th movie couldn’t do: Put an “end” to Jason and set up the eventual Freddy/Jason movie.

With a screenplay by Dean Lorey and Jay Huguley, from a story by Huguley and director Adam Marcus, Jason Goes to Hell: The Final Friday was released on August 13th, 1993. I remember watching it when it came on Cinemax about a year later, when I was either a junior or senior in high school. I was interested in watching it in and of itself but the real reason I wanted to see it was because, by that point, Fangoria had reported the surprise ending….

The acting is slightly better in this movie than in the previous Friday movies. The script gives the actors a little more to work with. That said, the stand-out performance for me was Erin Gray’s. Now, it could just be the nerdboy in me talking, except that I never saw her in Buck Rogers (because I never saw the show, not because I couldn’t see her, that’s weird of you to think), I only knew her from Silver Spoons. But she brings real pathos to her role. John D. LeMay as Steve Freeman is also pretty good. He also starred in Friday the 13th: The Television Series, only he played a different character. 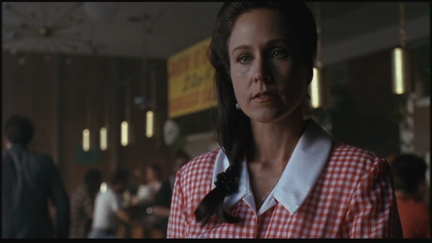 I know I write this often in these essays, but I feel like I’m often grasping at straws, so my apologies for repeating myself, but the fact that the screenwriters tried to move into a totally different direction with Jason (Kane Hodder) and the series needs to be applauded. They truly leave the idea of Jason terrorizing teenagers/young adults behind and take the movie into a new direction. Jason is now a known enemy to the United States and a task force has been employed to destroy him. Playing with horror as a genre, they reference the Evil Dead films and give a reason for Jason’s supernatural ability, as well as a way to destroy him. They also give him a larger family that changes the way he can be viewed.

If you’re into these movies for the gore, then you’re in luck. Whatever shenanigans that kept gore out of the eighth movie seems to have gone away for this one. It’s ridiculously gory. So if you’re into that, that would be a plus.

Freddy! Yeah, you must’ve known I was going there. At the end Jason is dragged into hell by monsters. There’s a close-up of his hockey mask. He’s dead. And then Freddy’s gloved arm shoots up, grabs the mask, and drags it into hell, with Freddy’s signature laugh. Of course, the arm looks strangely muscular (Kane Hodder provided the arm) and the blades of the glove bend when they hit the dirt, but it’s Freddy.

Everybody has their demons…

While the overall acting is slightly better in this movie, there are still some horrible performances. For me, the most surprising of these bad performances was given by Steven Williams as he played bounty hunter Creighton Duke. Williams has had a long, good career. I first knew him as the boss on Fox’s hit 21 Jump Street, which starred A Nightmare on Elm Street alum Johnny Depp. Williams was also a nerd favorite on The X Files as Mr. X. He’s a pretty good actor who is terrible in this movie. Maybe it’s not the right role for him. I don’t know, but it’s bad.

The story is real bad. That’s the problem with the Friday the 13th movies (or the Jason movies, as I guess they should be called for the next few essays), even if it’s the best written one, chances are likely that the movie is still shitty. Jason Goes to Hell: The Final Friday is no exception. It begins with Jason stalking a young woman who turns out to be part of that federal task force I mentioned earlier and ends with him being dragged to hell by some of the silliest monsters I’ve ever seen (though less silly than the Dream Demons from Freddy’s Dead: The Final Nightmare, I’ll give Jason the point for that). And then a young family walks into the sunrise. What? Yeah, you read that correctly. There’s a baby in this movie, and family issues, and a love story, and stereotypical foul-mouthed fat ladies, and more plot holes than I have time to list. And, the biggest problem by far is–

Where’s Jason?! New Line Cinema acquires their biggest horror competitor. They want to do a Freddy vs. Jason movie. They’ve already killed off Freddy (and it won’t be an issue that he returns for Wes Craven’s new Nightmare movie, which will be released the following year). And here we go with killing off Jason and…we’re going to keep Jason out of most of the movie. 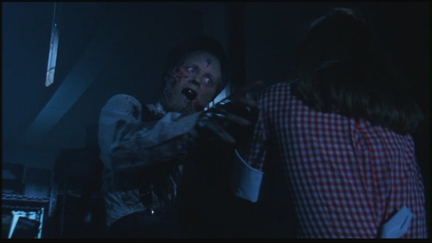 Jason appears at the beginning, as I mentioned, until the U.S. government blows him up. Then his remains spout some creature that then goes around possessing people. We’re told by the bounty hunter that Jason the person has long been dead, but the evil entity in him takes his evil essence and finds new hosts for him. The idea is that Jason has been different people all the time. Forget the fact that almost every Friday the 13th movie showed him return from the prior movie’s resting place. The only other time we see Jason until the very end when he finally returns (plot hole alert), is in the mirror whenever his hosts stand in front of one. Instead of seeing Jason kill, which is all his fans pay to see anyway, we’re given a variety of characters committing Jason-style violent deaths.

Which only highlights what I’ve been saying throughout these movies: the true reason for the horror of a horror movie isn’t even being attempted, not even for laughs. The movies have devolved into a slaughterfest meant to do nothing but make powerless adolescents laugh at gruesome, horrible deaths. The fact that this is the ninth movie of this is a horrific happening unto itself.

Oh, and let’s talk about Jason himself in this movie. He looks stupid. His head has somehow inflated to twice the normal size, he’s regrown hair, and he’s not even close to wearing what he wore in the last few movies. If this is because he’s in a new body, how did the head come to look like a watermelon-sized meatball? He’s lame. 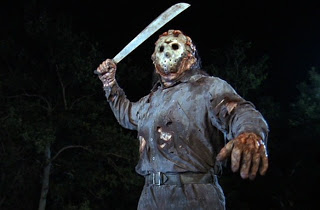 Jason Goes to Hell: The Final Friday is a new day for Jason. New Line was able to make it more supernatural than the character (and story) had been but ultimately failed to do anything interesting with the movie. It’s essentially a 90-minute prologue to Freddy vs. Jason, which they hoped to make after the new Wes Craven Nightmare was released. As a teenager, I thought the movie was okay. As an adult, I’m shocked by how bad it is compared to my memory of it.

The movie did okay and it certainly promised fans what they’d been hoping for for nearly a decade. With all the pieces in place, what could possibly go wrong?