With the Friday the 13th movies still making money but straining a very thin premise, Paramount and producer Frank Mancuso, Jr. were looking for something new to do with the franchise. Sean S. Cunningham was also interested in possibly doing something new with the franchise, especially now that there was a new kid on the block. The block happened to be on Elm Street in a sleepy town called Springwood.

In 1984, the fledgling New Line Cinema released a film by Cunningham’s protégé Wes Craven called A Nightmare on Elm Street. The movie was scary and had become a sleeper hit. The villain of the film, Fred Krueger, portrayed by the classically trained Robert Englund, sliced his way to the top of people’s Favorite Villains list with a concept unlike any that had been done before. New Line went ahead with a sequel even though Craven refused and 1985 saw A Nightmare on Elm Street 2: Freddy’s Revenge. While the critical and fan response to the second movie was much less favorable than its predecessor, the movie earned more than the first movie, securing another sequel. In 1986, filming was underway on A Nightmare on Elm Street 3: Dream Warriors. With the return of Wes Craven, along with his writing partner Bruce Wagner, on the story and script (along with Frank Darabont and director Chuck Russell), anticipation was high. Freddy Krueger was already being mentioned alongside Jason Voorhees as one of the best monsters of 1980s horror.

Cunningham saw this as an opportunity to revitalize the series he co-created and pitched the idea of putting the two maniacs together in the style of the old horror movies. So began talks between Paramount Pictures and New Line Cinema. Paramount wanted to “rent” the rights to Freddy Krueger, Elm Street, and the rest. Being an old movie studio, it was in a position of power. Except that New Line’s new horror villain was the “It” Monster at that moment. Freddy had a sense of humor, ran around, and got people in their dreams while Jason just shambled about. So New Line proposed “renting” Jason, et al. Neither party would budge and the deal fell through. Still, the movie was pretty close to happening.

So with the Jason and Freddy match-up off, Paramount and Mancuso, Jr., went ahead with plans for a seventh Friday the 13th. Still, the idea that Jason had a formidable opponent was forefront in their mind, so writers Manuel Fidello and Daryl Haney gave Jason a psychic/telekinetic teenage girl to fight. It reminds me of that famous quote from Ferris Bueller’s Day Off: “I asked for a car, I got a computer.” Paramount asked for Jason vs. Freddy, they got Jason vs. Carrie.

This was the first Friday the 13th I believe I saw since it came on HBO/Cinemax the year after its release and by that point I was officially into horror. I liked it well enough at the age of 12, I guess. It was interesting, at least, the girl using her mind to move things. Since this was before I began reading Stephen King and hadn’t seen the movie Carrie, I didn’t have that as a frame of reference. That probably helped me somewhat like the movie back then.

Jason (Kane Hodder) looks like a monster, which is cool. Between the third movie and the sixth, he could just as well have been Michael Myers of Halloween–a dude with a mask killing late-teenagers/young adults. Somewhere he even got a jumpsuit like Myers. With this movie, director John Carl Buechler decided to really have Jason look like he’s been through the wringer. While the previous movie zombified him, this movie went all out. He’d been in a lake for years and now looked it with his clothes in tatters and bones visible. It also made Jason different from the other famous monsters of the 1980s. 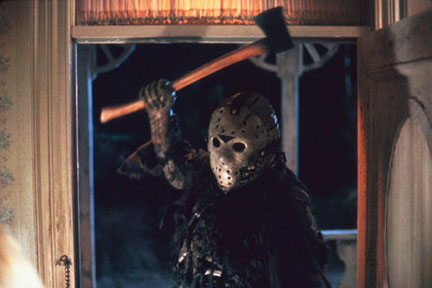 The attempt at something different should also be given a nod. It would have been real easy to just have the kids be at a camp all over again and Jason inexplicably come back to life and kill them one by one. This time, there’s a telekinetic teenage girl named Tina (Lar Park Lincoln). There was a hint of spousal abuse that could be brought up and a doctor (Terry Kiser) who seemed to be taking advantage of his patient for personal gain. Tina’s powers are a little silly at times (try not laughing when a TV flies through the air when she’s upset at the doctor and her mother) but the fights with Jason are almost interesting and somewhat entertaining.

Terry Kiser is good in this movie. His is a face you would recognize as he was in so much in the 1980s. I mean, he was Bernie in the Weekend at Bernie’s movies! He has a quality about him that’s just kind of slimy and he pulls off the Doctor-Up-To-No-Good thing so well.

The acting has gone back to being uninteresting at best. Some of it is horrible. Most of it is forgettable. Lar Park Lincoln does her best with the material but it just falls flat. I almost wonder if a better director, or better script, would have helped her. The rest of the cast fits into stereotypes, one way or another.

Though the look of Jason now distinguishes him fully from Michael Myers, I was distracted by the make-up effects for him. You can see his teeth and jaw exposed on the left side of his face and his ribs and spine on his back. Yet, they never feel like they’re in him, but rather on top of him, which they are. It was a valiant effort that ultimately fails and actually distracted me.

The beginning and ending are lame. The movie starts with young Tina running out of a house on Crystal Lake (where we see Jason floating beneath the surface, looking like he did in the previous movie). Young Tina climbs into a boat and rows away from the dock. We’ve heard the sound of her parents fighting and her father hitting her mother. Then Daddy comes out and chases Tina, saying he’s sorry and that he’ll never hit Mom again and all that shit. In a moment of anger, Tina uses the Force to destroy the dock, which means Daddy falls into Crystal Lake, to his doom. When she comes back for “therapy” years later, Tina goes to the dock and senses a presence underwater (I think…this is never really clear). Then she uses her telekinesis to bring Jason back, thinking it’s her father.

At the end, the way Jason is finally “killed” is lame because Tina, once again on the dock, her new boyfriend with her, is being attacked by Jason (who we thought was blown up with the house). Tina uses the Force again to feel a presence under the lake and WHAMMO! Daddy comes out of the water, through the dock, and brings Jason down with him. Unlike Jason, though, who decayed underwater for almost a decade, Daddy is a little dirty but is otherwise the same guy we saw in the prologue.

And while we’re talking about Daddy here, let’s talk about how fucked up this movie is when it comes to women. Now, I know that the Friday the 13th movies tend to objectify women, but there are some strongish women in most of the movies. Or at least I think they’re supposed to be strong, because it’s almost always a woman who defeats Jason, or helps defeat him. But bear with me here. So in the prologue, we hear the mother get slapped by the father, who, moments later, tells his little girl that he won’t do it again, even though it seems he’s made this promise before. So she kills him. Now, she comes back in her therapy (which is really just the doctor using her powers to make a name for himself) to the location where Daddy met his fate. She is distraught at the memory that she killed him. Her mother tries to assuage her grief. There’s a photo of Dad on the wall in the house. She killed her Dad, she killed her Dad…waaaah! And then she uses the same powers she used to bring Jason back to bring him back to save her. Has she forgotten the reason she killed him? Has she forgotten that he beat her mother? I know that a child may feel guilt at this, and that guilt might carry over the years, but how can Mom be so understanding? Or am I just reading too much into this subplot?

While the filmmakers attempted something different, they fail. By now, it’s beginning to feel like gimmicks are being thrown together. Not that the whole series is anything more than gimmicks. Jason in 3D! Jason dies! A new killer! Jason lives! Jason fights…um…er…you said we can’t use Freddy?….um…Jason fights…[sees Stephen King’s Carrie on the bookcase]…a telekinetic girl! Here’s the thing with the Friday the 13th movies and the character of Jason Voorhees as he’d been presented up to and including this point: You can’t do much with him. He is a zombie who doesn’t eat his victims, who has superhuman strength, and always manages to find a machete. He’s just a machine that kills. So you could have him fight a telekinetic girl, Freddy Krueger, or the Harlem Globetrotters but the fact remains that he’s just going to shamble around killing people.

Now the Harlem Globetrotters’ theme is in your head but it feels like this.

I realized while writing that last paragraph that it was becoming the wrap-up, so I’ll wrap it up. By the seventh movie in this franchise, Jason Voorhees is a bore. The sixth movie proved to be the exception that proves the rule. Friday the 13th Part VII: The New Blood was made for $2.8 million and earned $19.2 million after its May, 1988 release. Compare that to A Nightmare on Elm Street IV: The Dream Master, which was released that August and cost $13 million (about $10 million more than the former) but made $49.3 million, more than any of the original Friday the 13th movies had ever made.

The only thing the filmmakers could do to keep him interesting was throw in different gimmicks. What would be next? Freddy was too successful on his own. Fight Michael Myers, whose own franchise had been rejuvenated based on the successes of Jason and Freddy? Have Jason fight Superman, whose movie career was over for a bit? Or maybe a change of scenery would be it. Something silly, like sending Jason to New York.

Yeah, right. Who would buy that?