From Krypton to Gautham: Superman (1948) 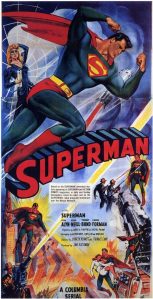 Ten years after Superman made his historic debut in Action Comics, and five years after his final Famous Studios adventure “Secret Agent,” Superman returned to the big screen in his first live-action adventure. Simply titled Superman, Columbia Pictures released fifteen chapters of Superman’s struggles with criminal mastermind the Spider Lady. Unlike the animated adventures before it, which were not just meant for the kiddies who went to the Saturday matinees but also for the boys World War II, Superman was meant to appeal to the kiddies in the movie theaters waiting for whatever adventure they’d paid their 40¢ to go see.

I don’t know when I’d become aware of the Superman movie serials, maybe my teen years, but I’d never seen them before I’d decided to write these essays (and as of this initial writing, I’m only four chapters into the subject of next week’s essay, the second Superman serial Atom Man vs. Superman). I wish I’d seen these as a kid, a young kid, before Star Wars ruined simple special effects for me, before seeing Christopher Reeve in the suit. Still, it was interesting to see this, only my third go at watching a 1940s movie serial (the other two will be subjects in a future essay series and involves a different DC Comic hero) and it was interesting. So, here we go….

The main cast is pretty good for serial actors. Now, not to put the form down, but movie serials are not known for their acting but rather for their adventures and cliffhangers. Still, Superman‘s cast isn’t too bad. Noelle Neill as Lois Lane is spunky and fun to watch. Tommy Bond as Jimmy Olsen is appropriately a pain in the ass. Even Pierre Watkin as Perry White, who mostly sits behind a desk and snarls at Clark, Lois, and Jimmy is good (though Perry White does get to see a piece of the action. He even gets his own cliffhanger!). Still, without the right person in the lead, this whole dog-n-pony show would fall apart, so enter Kirk Alyn as Superman.

Alyn played both Superman and Clark Kent differently and did a pretty good job with each. He will never go down in history as the Best Superman (or Clark Kent), but I daresay he’s better than Dean Cain. Alyn is tall with dark hair and has a heroic air about him. He even does “This is a job for Superman” (or they may have just used Bud Collyer’s voice, because it’s always in voiceover). As Clark Kent, he enjoys playing ‘fraidy cat and pulling off the secret over his friends. Almost too much (but I’ll get to that later). As Superman, Alyn gets an enthusiastic look in his eye, as though he’s having a good time playing the role. In this day and age of morose superheroes, it’s refreshing. While he is padded under the suit, he won’t be the last to be so. And if there are any criticisms I have, I don’t think they originate in his performance. 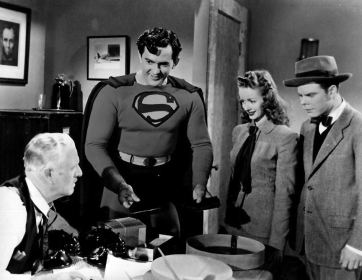 The nostalgia. Now, I’m hesitant to use this term because having come out in 1948, Superman is 29 years older than me. Still, watching the serial brings one back to a different time period that I’d be interested in visiting. Not living, no way, but visiting. I asked my father, who would’ve been seven when these came out, if he’d seen them and he said he didn’t think so. What a shame. Imagine being seven in 1948, before TV was mainstream, never mind cable, and seeing Superman in live action for the first time! Damn! Here’s a guy you read about in the flesh, being super. This is a Superman for a simpler time, a time when comics were kids’ stuff, a time when all it seemed to take was a man in a cape to solve things. The simplicity in this serial attests to that.

The scope. I’ll hand it to the filmmakers, they didn’t let a small budget stop them from trying to deliver an epic. With a story by George H. Plympton and Joeseph F. Poland, and a screenplay by Arthur Hoerl, Lewis Clay, and Royal Cole (according to the credits, adapted not just from Action Comics and Superman comic books, but also from the radio show), producer Sam Katzman and directors Spencer Benett and Thomas Carr really try to give the fans a sense of who Superman is, much more than the filmmakers responsible for the Batman serials of 1943 and 1949 (okay, I gave it away). The serial begins on Krypton and follows Kal El to Earth, where the Kents find him and raise his as their own until Clark, as an adult, heads off to Metropolis to try to be a reporter as he also saves the world as Superman. With the Spider Lady trying to take over the world (or something), the scope of this tale is pretty big. 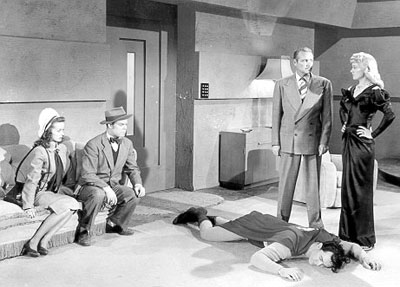 The direction. Or the screenplay. Or maybe it’s the budget. Or maybe it’s that it’s 1948 and a serial made for kids about a guy with a cape and so isn’t taken seriously, but I felt like there were a lot of missteps in Superman. Kirk Alyn played Superman rather well, but I had a few small problems with him that I think stem from story and/or direction. Superman can be kind of a jerk sometimes. In hiding as Clark Kent, he occasionally likes to make Lois Lane seem like a lunatic. Considering she’s a star reporter in a major metropolitan newspaper in 1948, she shouldn’t be as dumb as she sometimes is, and Clark Kent/Superman really seems to enjoy fucking with her. He also beats up the bad guys. I mean, here’s a guy who can stop bullets, but he punches bad guys out on several occasions. The kicker is, the punches only hurt the bad guys as much as a normal punch would. So that’s just silly. Superman’s favorite move, though, is picking two villains up by the back of their jackets and smacking their heads together. Another issue I had with Alyn’s performance was that sometimes, he wasn’t very super. He had a tendency to run or walk with his arms out, as though on a highwire. I’m sure this had more to do with direction than interpretation. Either way, the direction and screenplay are sometimes lousy. No nice way to put it. 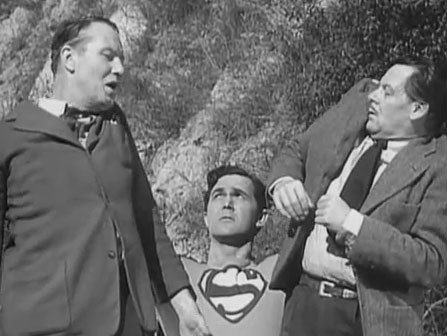 Guess how this ends? Actually, Superman just drops these thugs.

It’s too simple, too. I know the serial was made for kids, but come on. The simplicity of the story defies logic. A precocious child would surely see problems in logic, even in the “innocent” days of 1948. There is a ray (there’s always a ray) that does something that the Spider Lady wants. And then there’s…there’s… All right, I don’t remember much about the plot, mainly because it’s pretty bad. The intention of the serial, I think, wasn’t to tell a long story so much as to get Superman in live action onscreen. Since 15 chapters were what these serials were about, the story–pretty flimsy to begin with– is stretched to near breaking. Take into account the limits to the serial by budget and quality of special effects, and you have a story that is sometimes too naïve and takes great leaps in logic.

The budget is a problem. I don’t know what the budget for this serial was (I will revise this later should I find out) but I assume that it wasn’t a lot. First off, most serials didn’t have great budgets. Second, this doesn’t look as good or as polished as movies made earlier, like James Whale’s Frankenstein, which was released in 1931. Third, the actors are all B-actors or character actors. They all do well enough but are obviously not going to win any awards any time soon. More than all that the budget hurts because Superman really isn’t a character who is cheap to do. Because of his super powers, he should be larger than life, yet he never really gets there. Yes, Kirk Alyn helps in this department with his enthusiastic portrayal, but everything around him hurts, including–

The special effects. Superman’s powers are abysmally lame in this serial. The first time Superman arrives, he saves a train with Lois Lane and Jimmy Olsen on it by fixing the track–off screen. There are jail bars he bends at one point that are laughable easy (they continue to rotate even after he is through the window). And then there’s the animation. We have grown used to seeing animated special effects. The main difference between 2013’s animated special effects and 1948’s is that we have CGI realistic looking effects while they used hand-animated effects. So when a thug shoots at Superman, the cartoon bullets that bounce off his chest are laughable. And when Superman flies away, the cartoon Superman that takes Alyn’s place takes you right out of the story. Even the sets leave room for improvement. The Spider Lady’s electrified web looks like something out of a suburban Halloween party, all glitter and cheap.

The locations. These serials were obviously shot in and around Hollywood. The same Columbia backlots are used and re-used, and a lot of the action leaves Metropolis for the desert around L.A. These serials aren’t about getting the feel of Metropolis right, they’re about telling a Superman adventure. But the day-for-night that changes between poorly filtered daylight to straight-out daylight is silly.

It’s not difficult to make a Superman story for the big screen, but it’s damn difficult to do well. Superman succeeds in some areas and fails miserably in others. Still, I look back on the experience of watching this 15-part serial with a smile on my face. I’m looking forward to watching its follow-up, Atom Man vs. Superman for discussion next week (or when I can finish it and write an essay about it). I recommend this serial in the way I’d recommend looking into any historical piece, and that’s what this is: history. It is the first time Superman appeared in live action on the big screen. And even though it’s pretty bad, it’s not bad, either. 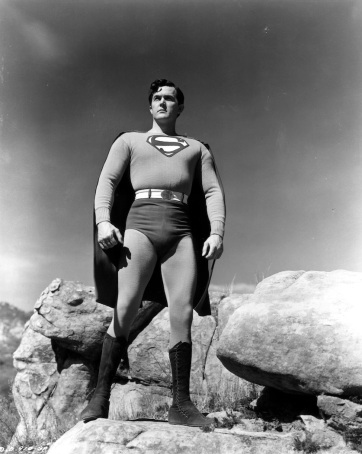